“Make it work with what you’ve got⁣”⁣From the very beginning, this has been the Garage Clay motto, and honestly the boiled down message of what we hope to bring to our community – you can make! Pottery is an accessible art form + creative practice, regardless of your background. The Garage Clay space is the biggest living example of this motto. ⁣

The current GC space is a renovated 1940’s calving barn [as in an actual old barn where calves were born]. The building came to us with dirt floor, dilapidated tin walls, + no windows or electricity. The structure + all the items inside were rebuilt by us, with *overwhelming* help from our family + friends, none of whom are actual carpenters 😂. ⁣⁣Every piece of our shop has a story + so much character. Like the concrete floor poured by Claire’s dad…..due to the entire building being structurally tilted it has a serious slanty ‘tude we have to take into account when placing shelves. Or the table that Claire + Colin (Claire’s partner) made from an old barn door…that ended up being five inches taller than originally planned because of their poor math + measuring. And the cash bar Luke (Elise’s husband / Claire’s brother) built with scrap wood he saved from the burn pile alongside the windows that Elise’s dad installed last summer on the hottest day of the year. ⁣⁣There have been minor cuts, bruises, bee stings, a handful of near miss catastrophes including an almost electrical fire + so much heart that went into this humble little space. It might not be glamorous, but it works just fine for us 💕✨⁣ 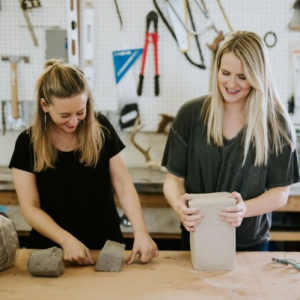 The sister-in-law duo behind Garage Clay with a passion for clay, community, and customer care. When they aren’t carving mountains into pots, you can find them getting lost in them - hiking, camping, skiing, and fly fishing.
PrevPreviousClays Sold at Garage Clay
NextGarage Clay’s Gift Guide For Potters!Next

How to Use Diamond Core Grinding Discs

We are delighted to introduce the newest pottery + ceramics tool available at Garage Clay: The 8″ Diamond Grinding Disc, or the “Potsaver” Diamond grinding

Subscribe to the Garage Clay newsletter to get updates on Garage Clay, reviews of our products, tips on working with clay, and exclusive sales right in your inbox.